Dar es Salaam, Tanzania (CNN) — He’s
smashed world records and revolutionized
running during his illustrious career. And yet the
name of Filbert Bayi has almost been forgotten.
The date was February 2, 1974 and the stage
was the men’s 1500-meter final at the 1974
Commonwealth Games in Christchurch, New
Zealand. Leading from the start, Tanzanian Bayi
continued at a blistering pace throughout the
race to cross the finish line first in a race that’s
often described as the greatest middle distance
event of all time. His record-breaking time?
Three minutes and 32.2 seconds.

It
would take five more years for Great Britain’s
Sebastian Coe to break that achievement.
Today, 40 years on, Bayi’s phenomenal
performance remains a Commonwealth record.
“I changed the system of running,” Bayi tells
CNN. “In those years before I broke the record,
most of the athletes were running in the group,
waiting for the last 200 meters and sprint.
“I changed the whole system [and] ran from
beginning to the end. Very few people
appreciate that. Just because I didn’t win a
gold medal in the Olympic Games but still my
[Commonwealth Games] record stays for 40
years.”

Tanzania’s most decorated athlete was born in
the Rift Valley — a region renowned for
producing some of the world’s best runners. He
says the area’s high altitude and farming
lifestyle cultivate the skills required for long
distance running.
From cow herder to track superstar
“My parents were farmers, cow herders. When I
was a kid, I used to take care of the goats or
cows,” he explains. “And up there in the bush,
you do hunting, running with the dog, running
with the animals and running with the cows and
all that, I think, made me built me some
stamina.”
In 1961, at the age of six, Bayi started school.
Its location was two miles away from where his
family lived.
“So every morning I had to run to school, then I
had to go back for lunch. Then I had to go for
afternoon classes. So you can imagine I ran
about eight miles a day. That made a lot of
stamina in my body.”
Through his years at primary school, Bayi
continued to excel as an athlete immersing
himself in competitions and working his way up
to regional and then national competitions in
the hopes of being like his idol, Kenya’s two-
time Olympic gold medalist Kip Keino.
Bayi continued his training in the 1970s but he
found training in a group a grueling endeavor,
especially when he would get inadvertently
caught on the spikes of other athletes’ shoes.
“Your life is in danger when somebody spikes
you. I thought the only way to avoid spiking
was to run from the beginning in front of
everybody,” Bayi recalls. “I think I caught some
of the athletes with that because they thought I
would get tired.
“They made a bad judgment. They said they’ll
get me next time but next time the same thing
and I always say ‘Follow me, catch me if you
can.'”
Coaching Tanzania’s future talent
These days Bayi tends to keep off the track and
instead focuses his attention on a lifelong dream
— to run his own schools and nurture young
sporting talent from his homeland.
With the help of his wife, the former middle
distance runner opened the first iteration of the
“Filbert Bayi School” in a garage with just seven
children in attendance. The school continued to
grow and by 2004, it had developed into a large
campus catering to 1,300 students from
nursery-level up through primary school and
into secondary education.
Bayi says: “You know sometimes I sit together
with my wife and we can’t believe this. It’s a
miracle.”
Not content with the education opportunities he
has provided to the surrounding communities,
Bayi has now set his sights on the next goal —
to open a university.
“One day I will have a university maybe, college
where I can teach doctors or engineers in that
school,” he says. “Or maybe we’ll be expanding
the institution to be a big sports academy
where we can receive even foreigners.”
Meanwhile, Bayi continues to use his strong
track record as a means of inspiring his
students.
“Most of the students, they want to be
professionals,” he says. “They want to be IT
people, they want to be pilots, doctors, be
everything. We always tell them, if you want to
be anything you have to work hard because
those things won’t come like a dream,” he adds.
“You have to work hard, you have to commit
yourself. 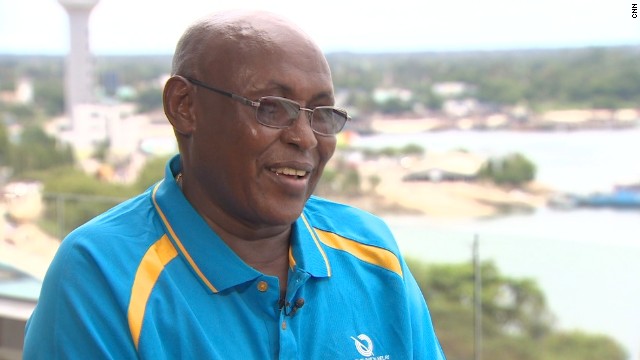 “Most teenagers don’t think about the future,
they think about now. So we always teach
them, now will pass and then the future will
come. And if you aren’t prepared for the future
you’ll end up nowhere.”
http://cnn.it/1lJA30v
source: CNN PICTURES BY :JAMII FORUM .